Amphoteric (or Zwitterionic) surfactants have both cationic and anionic centers attached to the same molecule. The cationic part is based on primary, secondary, or tertiary amines or quaternary ammonium cations. The anionic part can be more variable and include sulfonates, phosphates or carboxylates.

The most common biological amphoteric surfactants have a phosphate anion with an amine or ammonium part like for in example in Lecithin which is found in egg yolk: 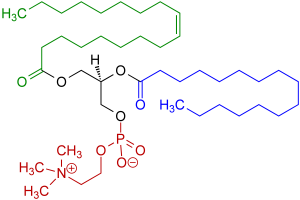